HISTORY
From antiquity to the XIX century
The history of ideas concerning hysteria is very old and is one of the most exciting in the history of medicine. During Greek antiquity (Hippocrates), the origin of the disorder was at the level of a "wandering" uterus that could block the nervous flow and which, for example, could cause respiratory discomfort when it migrated to the lungs. In the Middle Ages, these patients were often considered to be witches, cursed by the demon, and could be condemned to the stake. During the seventeenth century in London, Thomas SYNDENHAM had shown the protean and changing character of hysteria, with passages from one symptom to another.

The XIX century
It was not until the middle of the XIX century that its cerebral origin was recognised (Pierre BRIQUET). This Parisian neurologist proved, of a fashion, the role that favoured ancient traumatic experiences. A little later, John Russell REYNOLDS of London showed the importance of emotions and of "ideas" or representations in the apparition of symptoms (before making a move, it must be programmed from an idea). Also in the late XIX century, Jean Martin CHARCOT, neurologist at the Salpêtrière in Paris, attempts to apply the Anatomo-clinical method of neurology to the hysteria that he will first consider as a purely neurological problem. He was to issue the very modern hypothesis of "functional lesion". This lesion, he would not be able to see by analyzing the anatomical parts of brains of deceased hysterical patients. However, this hypothesis would be confirmed by recent data from functional brain imaging (see below). Having not found a functional lesion, he was to gradually abandon the neurological approach and instead attach importance to emotions and ideas (or representations, more often unconscious): "An idea can cause paralysis and the other can cure it." He therefore explains some unexpected improvements or spontaneous cures. He was to create a laboratory of physiological psychology for the psychiatrist Pierre JANET who would introduce into concept which what would become major and which we shall discuss below: The phenomenon of dissociation, meaning the ability that the brain has to "dissociate", to fragment or to compartmentalisation, during a strong emotion, which can lead to the different symptoms that are encountered in FND. For example, amnesia sometimes observed during a major psychological trauma or sexual abuse corresponds to the exclusion of certain networks of the memory out of the field of consciousness.

The XX century
The conceptual model that had the most notoriety at the beginning of the XX century was that of "hysterical conversion", a process that converts an unbearable psychological distress into physical symptoms in order to soothe anxiety. Sigmund FREUD altered this concept by moving from unbearable psychological distress to unbearable sexual impulse. Actually, few neurologists and even few psychiatrists who care for these patients adhere to this concept..
During the twentieth century, there was a certain lack of interest concerning the subject of hysteria, in comparison with the development of other neurological and psychiatric pathologies, both from neurologists and psychiatrists. There are several possible reasons:
1) During World War I there was a sort of epidemic of hysterical phenomena amongst soldiers in connection with extreme situations on the battlefield. Neurologists used barbaric methods trying to treat these patients whom they had difficulty understanding. Perhaps they wanted to somehow forget this difficult period (see in the drop down menu "patients" the text on World War I)
2) Neurologists had difficulty recognising as a "neurological" patient those who had fluctuating and incongruous symptoms in relation to the symptoms encountered in classical neurological pathologies. Not complying with the rules of anatomical-clinical correlations elaborated over several centuries by neurologists, could be considered unbearable. However, we can see below, in the examples given of patients, that these so-called "incongruous" symptoms may be consistent with certain pathophysiological models of FND
3) The considerable development of identification of neurological pathologies thanks to techniques of imaging, biological examinations, genetics and pathology has left little room for these hysterical patients who do not allow themselves to be apprehended by supplementary exams.

CURRENT THEORIES
The beginning of current conceptual change is some ten years old and it was initiated by our British neurologist colleagues. They studied large series of patients with FND, their symptoms, triggering modes and their evolution. The onset of symptoms from a psychological factor is no longer considered as indispensable. Physical trauma can cause this type of disorder without there being any associated psychopathology. In these patient series, the overall prognosis for these disorders is unfavourable even on long-term studies after 12 years. These neurologists consider that paralysis has the same overall prognosis as multiple sclerosis, that functional abnormal long movements have the same prognosis as degenerative diseases of grey nuclei, that non-epileptic seizures have an evolution sometimes more serious than epilepsy itself. They have clearly shown that treating these patients as suffering from psychiatric pathology only aggravates the situation. They propose considering these patients as having a neurological problem with a disturbance of the cerebral "software", without neglecting the psychological approach necessary in many patients. The term functional Neurological disorders (FND) was proposed to emphasize the importance of a neurological approach in patients.

FND is now considered like the consequence of changing brain connectivity (all the connections between the cerebral neurons). But several explanatory models currently exist to explain how physical trauma, a medical condition or a psychological event will produce functional neurological disorders.

1) The Bayesian model
The most commonly accepted model is currently the one developed by Mark Edwards. It refers to the Bayesian model of brain functioning. The brain functions as a computer in which is progressively built an internal model of the world that will permit interaction through predictions from sensory information the brain will receive. For each information received, there is an anticipation or prediction through statistical inferences, most often unconscious, on the nature of this information. In this model, the brain constantly generates such anticipations. This system saves time by having information in advance. When these predictions are violated by unexpected sensory inputs, they trigger a signal of surprise or error. Events triggering functional disorders will modify the internal model of the world and consequently, alter ideas and predictions about the information received, resulting in focused attention disorders and disruption of perceptions and movements. The treatment that follows from this theory will essentially consist, through cognitive therapy, in trying to standardise the representations supposed to be the cause of the disorders. (For more information follow this link to Dr. M Edward's explanatory video)

2) The "Dissociative" model
There currently exists another theory, less commonly adopted, but appears more consistent with the supposed mode of action and the results of magnetic stimulation. This theory was introduced at the end of the XIX century by Pierre JANET. It refers to a psychobiological process through which, under the influence of intense psychological emotion or trauma, brain functions will dissociate, fragment, compartmentalisation and will be at the origin of different neurological functional symptoms. He calls this phenomenon "dissociative". This process would be non-lesional (functional) and potentially reversible. It could be the result of connectivity disorders that are beginning to be seen in functional imaging in some research centres. The behaviors or processes we want to perform are cut off from consciousness by narrowing the field of consciousness (monitoring disorder) or the executive system (control disorder). We will see below that a trauma, not psychological, but focused physical is more than likely be at the origin of a dissociative phenomenon at the level of the corresponding neural networks and in return leads to a functional neurological disorder.
To illustrate this dissociative phenomenon, a study by P VUILLEUMIER in Lausane shows that in functional unilateral sensory-motor deficits, there exists a hypoactivity of the cortico-subcortical loops of the contralateral central region, which disappears once the patient is healed. 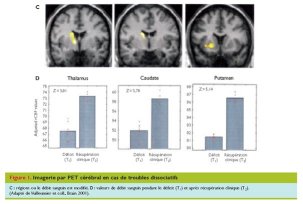 Another study by V. VOON in London showed that, in this type of patient, there exists a disconnection between the supplementary motor area which is very important in the programming of movements and the prefrontal regions, causing an inhibition of the voluntary motricity. There is, however, hyperactivity of the limbic regions (emotional brain), reflecting the importance of psychological phenomena in many of these patients. 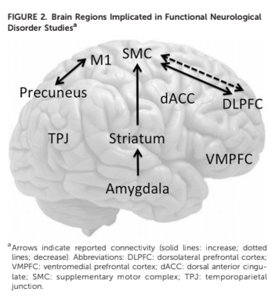 The same researcher showed a disfunction as hypoactivation at the right temporo-parietal junction responsible for agency, a process by which we are aware that the activity we are carrying out was planned by us, and that it belongs to us. 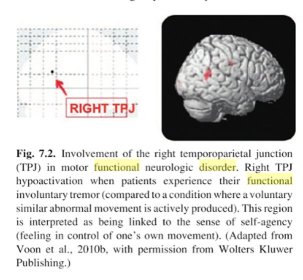 FND are often referred to as "functional and dissociative neurological disorders". The meaning of the word dissociative given at present to these disorders is different from that proposed by P. JANET. In current useage, it refers to states where the subject may be disconnected from their body and experience a sense of depersonalisation (it feels weird, disconnected, being both there and not there). He also refers to states where the subject can be disconnected from their environment and experience a sense of derealisation (their entourage seems far away and unreal as if it were hovering. They feel distant from their surroundings.) For Pierre JANET, all the symptoms of FND are related to dissociative processes.

In this model, it is possible that cross-cranial magnetic stimulation "large field" and peripheral can act on these connectivity disorders and restore normal cerebral functioning.

3) The Proprioceptive Disorder model
Research on factors predisposing to FND has focused solely on the psychopathological characteristics of patients. In this model, FND would be essentially the result of an activation deficit of peripheral proprioceptive sensors located in connective tissue to the brain. These proprioceptive sensors constantly inform the brain about the state of the body. This deficiency would be related to a malfunction of these sensors in relation to a connective tissue genetic alteration observed in the vast majority of these patients (see page "FND and Ehlers Danlos syndrome"). Connective tissue ensures the reinforcement of almost all organs. For this reason, the brain is poorly and insufficiently informed and stimulated. In return, this creates muscular tensions, pain, and control disorders of many organs (motor control, functional colopathy, bladder disorders, vasomotricity, etc...). This lack of cerebral stimulation is also probably the cause of the fatigue that is present in all these patients, associated cognitive disorders (work memory, attention, difficulty in finding words etc.), possible discomfort, by the intermediary of a possible secondary brain disconnection. This proprioceptive disorder would therefore favour "dissociative" phenomena as described in the previous model. For this reason, these patients are predisposed to undergo FND's during a more or less important and sometimes subtle physical or emotional disturbance. Indeed, the questioning and clinical examination of patients with FND very often, (about 3 out of 5 patients and even more frequently in fibromyalgia), allows almost always to highlight elements in favour one of this constitutional fragility of connective tissue that characterise the syndrome of Ehlers Danlos "hypermobile" (see corresponding page). In these patients, it is designed to reactivate the peripheral proprioceptive sensors by peripheral magnetic stimulation and to act on cerebral connectivity by transcranian central cerebral large field magnetic stimulation. The predisposing factors of FND would therefore be essentially somatic in origin, although psychopathological disturbances may aggravate this predisposition or be the triggering element.